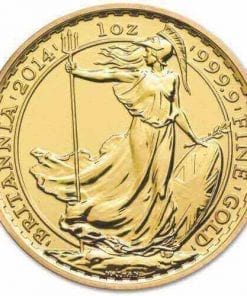 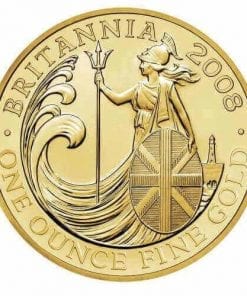 The Best Value Gold Britannia is the largest denomination coin in the UK with a face value of £100.

Previously issued in 22c purity, it has been updated to 24c since 2013. These are pre-owned coins in excellent condition and are the cheapest Britannias we offer. Coins can be any year from 1987 onwards of our choice.

The obverse illustrates the fifth portrait of Queen Elizabeth II, while the reverse features Philip Nathan’s classic design of Britannia holding a trident.

The coin was first issued in 1987 as the UK’s 1oz answer to the ever-popular Krugerrand.

Please note, the image is for illustration purposes only. Your actual coins can be any year mintage except the current latest year.

After years of relying on the Gold Sovereign as its flagship issue, the Royal Mint finally launched the 1oz Gold Britannia in 1987. This came 20 years after the Rand Mint launched the famous Krugerrand, the first coin to contain exactly 1oz of gold. Due to the South African coin’s huge popularity, it soon became the most widely produced coin in the world. The Royal Mint decided it was time to get a piece of this action, especially as the Sovereign coin’s gold content (0.2354oz) has always been less straightforward to market and track its price.

Like the Krugerrand (and indeed the Sovereign), the Gold Britannia was first minted in 22-carat gold which offers a more resilient and hardy finish. The Mint updated this from 2013 onwards as they ramped up the marketing and distribution efforts into the lucrative Asian market, who only buy 24-carat gold. Issued with a face value of £100, it represents the largest legal tender value of any UK coin. Smaller denominations followed suit like the Half Britannia, Quarter ounce, and tenth ounce. In 1997, the Royal Mint launched the Silver Britannia coin to capitalise on the ever-growing silver investment market.

The classic design of the renowned Britannia, standing with a shield and trident, remained unchanged for the first decade of issuance. The variations of the design have been created on alternate years since, featuring versions of Britannia seated, riding a chariot and with a lion.

The Gold Britannia is fast becoming the go-to coin for gold investment. Its one-ounce size keeps premiums to a minimum, while its legal tender status enables the investor to shield any profits from the taxman. The alternate year design updates add further to the coins’ desirability and collectability, further enhancing possible future returns. Due to the relatively short history of the Gold Britannia (celebrating only its 30th anniversary in 2017) and its growing reputation as a great investment, very few buyers want to sell. Therefore, mixed year Britannias only tend to come onto the market from time to time, or in small numbers. This lack of supply can further increase value, but buyers should be careful not to pay over the odds when the coins are very difficult to source. Certainly, any special offers on the coins should be snapped up. An alternative for those wanting a new coin is Gold Britannia.

We’d always recommend pairing the Britannias with Sovereigns and other UK tax-free coins to produce a portfolio of varying size coins, age and numismatic value.

Get an alert when the product is in stock: